Synchronization implicitly expresses an ideological conception of reality through its apparent resemblance to our everyday experiences: it renders whatever appears on-screen as a ‘neutral’ fact. The apparently autonomous connection of sound::image::text in both varieties of direct synchronization, naturalistic and illustrative, acts as a demonstration that transfigures underlying ideo-cultural belief into immanence. Realist construction descends from naturalistic synchronization. This recreation of the appearance of everyday life (re)produces the phenomenal world as it appears to our senses; the realism created seems to lack articulation and construction, instead offering itself as an artifact, similar to the idea of the “trace” or “footprint” that define the photographic image for film theorists such as André Bazin or Stanley Cavell. The experiences of everyday life are the foundational reference point for all varieties of synchronization, but the two direct varieties explicitly create claims about the “true” nature of the world—whatever that might mean—at it most basic the immediate construction of “reality” through formal statements of audio-visual linkage, of voice to an image of someone speaking, creates the statement that the voice heard belongs to the person speaking; lip-sync is the underlying formal relationship for all statements emergent in synchronization and their superficially autonomous realism. 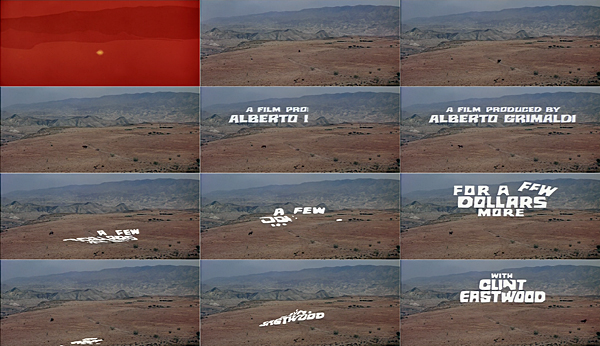 Naturalism, foundational to the realism of commercial cinema, presents a direct association of sound::image that is essential to the emotional impact in Lardani’s design for the Western For a Few Dollars More (1965). The combination of long take, theme music and direct synchronization makes the immediacy of connection between the gun shots and the ‘responses’ by the typography appear entirely natural. This three minute sequence begins with a distant rider gradually coming closer, while on the soundtrack, someone is whistling, then they load a rifle ready. It is unclear where this sound comes from; only faint wisps of smoke drifting in front of the camera imply an off-screen presence. The entire title sequence is a long take; what the audience waits for is this distant rider to approach. Once the rider comes in range, the unseen whistler shoots them, another wisp of smoke drifting across the shot—the view is placed to approximate this sniper’s point-of-view on the landscape below. A moment later, as the music starts, the titles begin flowing over the landscape like the shadows of clouds, their connection to the live action background an apparently integral part of the design. As they approach the top of the screen, the text “pops” up, like in an arcade game where players shoot at small targets (the titles) to win prizes: each title card exits when it has been “hit” by the same marksman who can be heard, but not seen, as the sequence starts. The initial live action moments’ apparent use of naturalistic synchronization renders the connections of gun shot to title card an apparently autonomous linkage, even though it is illustrative synchronization. The realism of both statements is related to the same apparently direct action-effect shown in the typography; however, what is particularly notable about this design is the artificiality of these associations—the film is a “spaghetti western”: all the sounds are Foley performances, added in post-production. The construction of direct synchronization in this title hides this fabricated nature through its proximate associations with the imagetrack that create these statements.

Direct synchronization fabricates the immanent connection of sound::image. Where naturalistic synchronization creates the appearance of everyday reality, illustrative synchronization constructs its relationships as a demonstration of ideo-cultural beliefs about the way the world really is, rather to offer an approximation of how the world appears. In place of invoking everyday sensory experience, the realism of illustrative synchronization creates a phenomenal encounter—but it is one that only resembles the familiar appearance of the world—the link of gunshot to reaction on-screen is clearly an invention particular to the title sequence no matter how much it seems recognizable. These effects are even more essential for documentary productions than they are in fiction films. In designing the sound::image relationship, direct synchronization creates statements about both the observable world of “surface reality” and the “true reality” of the world that is normally hidden from our senses.

These different conceptions of “realism” unite in direct synchronization as the immediately understood association of image and sound. In persuading its audience of the inherent link, the realism becomes that much more secure in its organization of the materials on-screen. Synchronization renders the realist ideologies employed in its construction as an apparently material feature of the work, unquestionable and beyond challenge. This unity makes the title sequence into a singular component within the larger drama, even when it presents essential narrative events and is otherwise integrated into that story. Understanding realism as ideology derives implicitly from the particulars of which depictions compose the “mere appearances” as with the choices of sounds to present in naturalistic synchronization, but it becomes explicit through the organizational role it plays in illustrative synchronization, and the determinate function it has in constructing and rearranging those appearances to create counterpoint synchronization.

Once the statement of synchronization moves away from the literal connections of naturalistic synchronizations such as lip-sync, the model that informs the production shifts away from a reproduction of the “mere” appearances of the world to a revelation of its unseen organization. The “visual musical” interpretation and organization common to the title sequence makes this ideological content both immanent and unacknowledged. Its invisibility as an ideological construct (apparent even in Eisenstein’s references to it in his chromo-phonic montage) originates with its ancient, even foundational role in European culture. Recognizing it as artificial demystifies this belief, enabling its consideration as an ideology that informs the conception and organization of these statements in motion graphics.

Illustrative synchronization and counterpoint both depend on higher-level recognitions of ideo-cultural belief in their organization; the difference between them demonstrates from their different modes of statement—as immanent encounter versus emergent organization. The meaning each develops reflects the same complexities of their production. The ubiquity and transparency of the connections created by the illustrative synchronization, no less than the emergent counterpoint, makes the determinant role of ideology in synchronization an implicit meaning for title sequences. In demonstrating an unseen order in the world, these statements affirm the ideo-cultural beliefs that are shown by and through the synchronization itself. Their status as ideology follows precisely from their realization of that ideology as the formal, phenomenal encounter itself.