The Statement of Synchronization

The designation “synchronized” identifies a particular relationship between the soundtrack and the imagetrack that is apparent to the audience as more than simply the coincidence of simultaneous presentation. The audience makes higher-level interpretations of structure and organization emerging over time from convergent events between sound and image. The identification of direct synchronization originates with its resemblance to phenomenal encounters in our everyday experience: when someone speaks, we see their lips move and we hear their voice as a conjoined encounter; the recreation of these types of synchronized relationship in motion pictures (unlike lived experience) is an artificial construction. In resembling our everyday experiences, the direct synchronization of sound and visual appears as an autonomous conclusion, its immediacy masking its underlying construction and artifice. Which sounds are combined with which elements in the image determines the character and nature of synchronization. 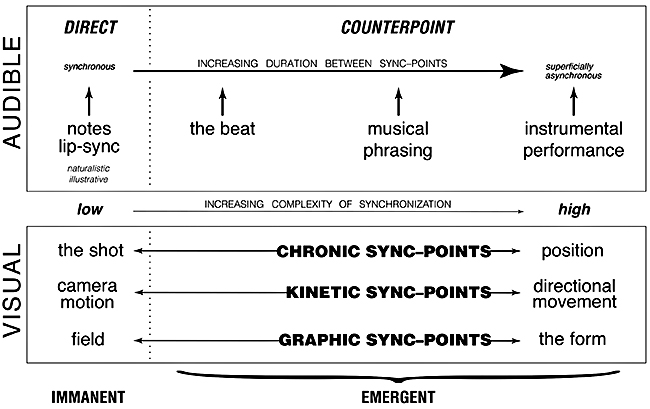 The linked experiential basis of audio-visual structures pose synchronization as a particular “formal” relation, one that is not structured linguistically, yet does present meaning. The relationships of sound::image employed in title sequences emerge from more basic organizations of audio-visual form. The semiotics that produce the complexity of sound::image in the title sequence are first organized and articulated as particular, discrete perceptions of relationship. Interpreting these arrangements coincides with the problematics of the enunciation that Michel Foucault describes in The Archaeology of Knowledge: a formal unit distinct from the demands of language (parole), implied by grammar (langue), but formally independent of it. Meaning begins with the grouping-together presented in the statement, rather than following from predetermined rules of language, a distinction that is explicitly a feature of audio-visual synchronization:

The statement is neither a syntagma, nor a rule of construction, nor a canonic form of succession and permutation; it is that which enables such groups of signs to exist, and enables these rules or forms to become manifest. But although it enables them to exist, it does so in a special way—a way that must not be confused with the existence of signs as elements of a language (langue), or with the material existence of those marks that occupy a fragment of space or last for a variable length of time. [Foucault, M. The Archaeology of Knowledge (New York: Pantheon, 1972) p. 88.]

In this “enunciative function” Foucault describes the action of creating the statement, rather than its connections with whatever meanings may be assigned to its terms; this act of delineation and compartmentalization depends on combinatory effects created by order and arrangement that register as the “statement” itself—neither the component parts, nor their meaning—thus ‘enunciation.’ The initial judgment that a voice heard and an image seen should be understood as a ‘singular unit’ enables a unitary interpretation of audio-visual simultaneity, but these structures have been left untheorized by semiotics because they evoke problems not normally considered when examining linguistic statements, issues that Michel Foucault specifically identifies for the enunciative statement:

The relation of the proposition to the referent cannot serve as a model or as a law for the relation of the statement to what it states. The latter relation not only does not belong to the same level as the former, but it is anterior to it. [...] The relation of a sentence with its meaning resides within a specific, well-stabilized enunciative relation. Moreover, even if these sentences are taken at an enunciative level at which they are meaningless, they are not, as statements, deprived of correlations. [Foucault, M. The Archaeology of Knowledge (New York: Pantheon, 1972) p. 90.]

The recognitions of terms and their meanings do not preclude the construction of valid, grammatical statements without lexical meaning; the elliptical form of rhetorical and poetic statements describe and demonstrate these problematics of meaning posed by/in Noam Chomsky’s grammatically correct, but nonsensical statement “Colorless green ideas sleep furiously.” that Foucault offers as an example whose considered meaning evades easy comprehension. However, its problems arise not because it is meaningless, but in the uncertainty of how to classify it: as “nonsense statement” it becomes an exemplar of statements without meaning, creating an immanent paradox, since the statement’s meaning is that it has none. This organization of meaning apart from the terms contained defines ‘enunciation’ as process and its functioning in the ‘statement.’

Foucault’s distinction between component terms, the statement and the meaning is especially appropriate for considerations of synchronization of sound::image. The classification of sounds encountered—as music, or as voice, or as ambient “noise”—separates distinct modes of analysis and determines the formative dimensions of the encounter. This initial engagement determines the scope of potential meanings that might be assigned to any particular sound—beyond its mere recognition. The addition of synchronized visuals renders even those sounds that might not otherwise be considered meaningful as potentially significant. This relation of sound::image elaborates and modifies the meanings that any sound might have: consider how the connotations of Christian Metz’s aural object, the ‘lapping sound,’ changes if hypothetically coupled with the image of a calm sea, a dark cave, a bayou, or an empty office. These transformations originate with the simultaneous sound::image presentation: in each case the combination results in different connotations at the level of enunciation (in each case a product of its simultaneity) that composes the sound::image unit as a statement without even considering the specifics of particular lapping sounds or images.

Animations, title sequences, and rhythmic montages cut to music all present determined meaning through synchronizations that are not dependent on lexical structure. Both phenomenal experience (simultaneity) and cultural referents organize these forms as a meaningful construct—as enunciation via the statement. These simultaneous presentation of sound-and-image depends on relationships not linked to unmediated, extratextual experience—as with music, even the creation of the instruments before the first note has sounded puts the “musical” inherently into a cultural domain. For cinema, realism denies the artificiality of synchronization, becoming an inherent demonstration of cultural ideation itself. The role of synchronization parallels musical compositions. The particular potentials realized as/in the phenomena are set in advance by established cultural hierarchies. In music, this constraint is revealed by the emergent structure and development of Rolf Liebermann’s composition-performance for 156 office machines, Les Echanges. The statement (performance) is identified by the audience as “music” rather than as “noise.” Synchronization achieves the same apparently inevitable emergence as music, demonstrating the dominance of “realism” for motion pictures.

The structuring and organization of sense-experience into particular phenomena—music, speech, noise—is an autonomously emergent transformation of encounter into coherence. This change is a secondary recognition guided by established knowledge and past experience, independent of the primary recognition that distinguishes or identifies particular sounds as specific phenomena. That these transformations of phenomenal encounters happen continuously without requiring conscious direction renders the world present as a natural, ontological phenomenon; this sensory encounter is mobilized into the identification of synchronization, complicating its theorization.

Although synchronization emerges from sensory encounters as meaningful through a semiotic process, it also remains fundamentally the direct product of a sensory encounter, phenomenological, and so begins at a lower-level of interpretation than those typically considered in the theorization and engagement with lexical forms. Making this basic distinction allows for clarity in considering the otherwise entangled encounters of sound::image in motion pictures that includes the mimetic/non-mimetic character of the sound itself, its emergent organization interpreted over time, and the proximate interpretation of its relationship to the visuals. The interpretation that a sound::image pair are synchronized as a specific linkage of sound::image that provides the underlying basis for higher level interpretations. It is this starting point in sense-experience, that renders the problem of synchronization apparent. Unlike parsing written language, where the letterforms themselves only become important in special circumstances, (otherwise they remain a secondary element to the significance they present) in the synchronization of sound::image in motion pictures, the sounds and images are important in their initial, phenomenal engagements—a material basis that is typically ignored in theorizing the formalized lexia of language. Synchronized works emerge in an encounter that comes before signification: the recognitions that for lexia happen invisibly in the linguistic encounter—the visual recognition and identification of letters, the distinction of which sounds are language and which aren’t—for sound are independent of any emergent pattern (such as “music”) that provide the central interpretation for the work. This experiential element’s primacy distinguishes these works from the linguistic; their analysis and interpretation can begin only through a process of identification and fragmentation that separates the continuities of experience for semiotic consideration.

Understanding synchronization as foundationally constructive of signification reveals that enunciation is never confined to only the first level of what the component elements might signify in themselves. A formulated statement requires the identification of its elements as a self-contained arrangement of “terms” organized and delimited in advance of their presentation, not simply as singular elements, but as a group placed into a particular configuration that is productive of meaning. Their organization demonstrates the audio-visual relations described by synchronization in motion pictures are dependent on the interpreting mind of the audience to recognize these formal associations and understand them as a singular unit independent of the character or nature of the individual elements; their meaning develops on contradictory levels, as the constitutive elements and their organization are independent of each other. The distinction between the noise produced by Rolf Liebermann’s office machines in Les Echanges and the music emergent from/through its organization precisely illustrates the independence/separation of the signs composing the statement, from the new signification arising from/through that composition (i.e. the meaning of the statement itself). This progression is contingent on the audience and how they choose to engage the statement, but their interpretations are also constrained by the statement itself. For Foucault, this limiting factor defines enunciation as such:

The referential of the statement forms the place, the condition, the field of emergence, the authority to differentiate between individuals or objects, states of things and relations that are brought into play by the statement itself; it defines the possibilities of appearance and delimitation of that which gives meaning to the sentence, a value as truth to the proposition. It is this group that characterizes the enunciative level of the formulation, in contrast to the grammatical and logical levels. [Foucault, M. The Archaeology of Knowledge (New York: Pantheon, 1972) p. 91.]

For non-linguistic statements without distinct grammars and whose denotative form—both images literally shown by photography, and the aural objects synchronized with them in the soundtrack—are always entangled with their potential connotative meanings, this enunciative level dominates the entire interpretive process. Synchronization becomes the material form of the audio-visual statement. Its formulation as the “statement” requires an imposition of ordering schema, the identification of potential signifiers and their arrangement that is constitutive of the parameters that make interpretation possible; the particular image always anchors the meaning of sound. This connection of sound and image recreates the natural linkage of lived phenomenal experience, transforming synchronized with images and music into an illustration of that score. Establishing sound::image relationships beyond the mere coincidence of being presented at the same moment is not only what is of interest about “synchronization,” it is also the everyday understanding of the term. However, these linkages render their association seemingly inevitable, hiding their artificial and arbitrary foundation; the transformation of ideology into immanent demonstration by this naturalness of synchronization reveals what realism serves to hide through the immanent statement of synchronization: a subservience to established hierarchies that dominate audience engagements with the visual, and render the mediating role of lexical interpretation as the supreme model for understanding.