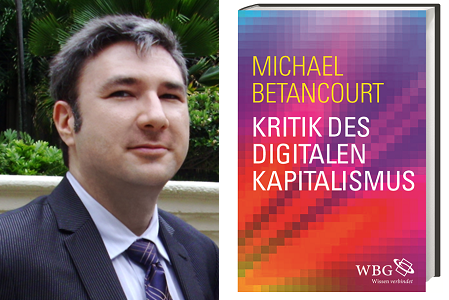 WBG has an interview about my work in The Critique of Digital Capitalism titled Gerechtigkeit in Zeiten der Digitalisierung available on their website in German:

Here are my answers in English:

1. Do you think that cryptocurrencies like Bitcoin will play, in a long-term view, a major role in the future?

The technology that is Bitcoin and other cryptocurrencies, apart from their function as virtual commodities, may find applications within the international banking industry. There are some experiments happening in that direction, but for the general public I expect there is a crash coming once all the Bitcoins are “mined.” Understanding this development depends on several features of the technology itself: that the “mining” of Bitcoins is a byproduct of the computations required for individual transactions is well-known, the “miners” do not charge to do these transactions specifically because of this payment generated by their work as processors; however, once all the coins are “mined” the costs of individual transactions stop being a value generating action and simply become a cost. This means it will rapidly stop being cost-effective to process the transactions, leaving only two options given the costs of rendering the computations, either (1) stop mining, or (2) charge a processing fee. These are really the only options once the incentive of being paid by the generation of new coins from the processing of transactions ends. Since there is no intrinsic value to Bitcoin (or any cryptocurrency) when this threshold is reached, the speculative values attached will drop as the cost of transfers increases. There is no “fix” for this failure in the blockchain system without significant changes to its fundamental nature; this limit is by design, not an accident. The values of virtual commodities such as Bitcoin are necessarily temporary: the end will almost certainly happen suddenly, with only a minimal warning, apparent as the number of “unmined” coins rapidly drops to zero and the costs of processing transactions rises. As a “currency” that competes with actual money, Bitcoin is already a failure—you can’t spend them on much of anything and their traded commodity-value is so high and fluctuates so often that their utility for exchange is compromised; however, as a speculative commodity, its long-term potential depends on how catastrophic it turns out for investors when all the Bitcoins have been “mined.” The issue isn’t the commodities’ value during the mania, but their value when the mania ends.

2. What is your opinion towards the development of the digital capitalism: Do you think this is something we are committed to without being able to influence it or do you believe in the possibility of political control of the further development?

Digital capitalism is something that has emerged almost without comment or critique, enabling its expansion without significant oversight precisely because it does not “fit” historical models for capitalism. Its specifically semiotic methods of value production and generation are distinct from historical concerns with physical constraints, making it prone to spinning fantasies of transcending the limitations of materiality—apparent in the aura of the digital. My analysis proposes a diagnostic model. The solutions to the challenges posed by digital capitalism are all political in nature, but linked to the implementations and potentials of computer technology. Ultimately the issue comes down to the conception of the data generated by these machines: who owns it, what they can do with it, and what protections are in place to affirm those controls. Digital capitalism as a system can be recognized in the individual behaviors of corporations that exploit the structural lapses of existing models when confronting computer technologies: this novel system has achieved its current dominance precisely by ignoring and/or refusing to follow existing legal controls and protections either by an outright refusal to comply with the laws (arguing that they are not applicable, or simply claiming “digital disruption” as an unqualified social good) or equally simply by shifting operations internationally to avoid oversight, in much the same way that wealth hides internationally. The profits to be gained by ignoring legal restrictions are great enough that when there are fees and penalties, these rarely ever rise to a scale of any consequence: it is rare that the profits gained are confiscated as a product of crime, or the companies forced into liquidation for repeated and consistent patterns of violations, or their executives jailed for their role in enabling a systematic refusal to follow established and well-known laws. These discrepancies are a reflection of the aura of the digital’s erasure of the physical world from consideration, and with it the existing legal order designed to protect society as a whole. Political control over digital capitalism, just as with historical industrial capitalism, must be imposed on the capitalists who will fight and oppose every attempt to limit their power. To address digital capitalism begins with an acknowledgement of the conceptual lapses that enable its expansion and predation. My critical model that incorporates the peculiarities of computer technology and how they enable the fantasy of accumulation-without-consumption allows the potential to challenge these impacts. Digital capitalism is fundamentally a product of social action, so it will always be something that can be impacted and redirected; however, to do so first requires a diagnostic approach that identifies how the present came into being—proposing alternatives and reigning in digital capitalism requires that information to succeed.

3. Karl Marx did still hope that the capitalism will be followed by a form of society without poverty and exploitation. Do you share this hope with him?

A more just society based on fairness, freedom, and equality is something that I believe everyone hopes to achieve, and there is no doubt that it is an ideal we should always consider in what we are working towards. Digital technologies, like all tools, are ambivalent. What might seem pessimistic to some readers, in my critique was developed as a diagnostic tool to enable challenges and opposition to the asocial expansion of digital capitalism; I developed my critique as recognition that while we have this ideal of justice, it is something that will neither emerge automatically nor as the necessary product of a teleological historical progression—quite the contrary, it is something tenuous, that needs legal restraints and protections to emerge precisely because achieving a just society requires overcoming and preventing the predations of the powerful. It is always a matter of human agency, even when the superstructural demands of society as a whole direct the choices and actions available. Interventions in this superstructure thus depend on the models that enable their description. The utopian aspirations for computer technology reflect a distrust in human caprices, but fail to recognize that the willingness to replace human judgment with autonomous systems does not remove those failings: it makes them into a permanent feature of the system, beyond oversight or challenge since to make changes to the technical system is to build a new one. This implementation is the danger posed by digital technologies and reified as digital capitalism. The aspiration to produce a more just society is admirable, but it can also mask the predations of the powerful, and this disguise is what emerges from the critical consideration of the digital.

4. What do you think about the idea of a basic income? Do you think this could be a solution for the danger of obsolescence of human work?

Universal basic income (UBI) or “basic income” as a concept has great potential, but the real question lies with particulars of its implementation: if implemented as a means to perpetuate the existing structural inequalities of digital capitalism, as a means of maintaining the status quo of wealth extraction, it will almost certainly create greater misery than it could solve. The issue is not income, but work itself: UBI would only solve the obsolescence of human labor if the elimination of human work is the goal; however, if it is introduced as a minimum supplement to enable the perpetuation of consumption, it will not address the challenges posed by digital automation. For autonomous production that eliminates human labor to produce a just society, and which makes UBI appear to be a solution, the surplus values generated by these machines must be redistributed to society as a whole—that is to say, UBI must represent the totality of these surplus values, rather than being an affective distraction that enables a concentration of wealth unseen outside feudal societies where the “king” owns everything and what the subjects receive depends entirely on a sense of largesse and obligation. To achieve such a society requires a radical reordering of priorities, one that involves the recognition that our social organization is dependent on labor to keep order by occupying the majority of people’s time with paid activities that enable (are essential to) their survival. The shift to “leisure” that automation and the obsolescence of human work represents is not something that the current social organization is ideologically equipped to understand or accept: not working is and has been conceived as immoral, profligate, prodigal, so the displacements created by digital automation will likely be enormously destructive. The transition underway with digital automation is fundamentally ambivalent, it might produce either a society of greater injustice and inequality, or a society that is more just and equal—we are still at the very early stages of this shift. What we choose depends on the models we have for understanding our current situation—an accurate diagnosis of where we are and how we got here has been my focus in developing the critique of digital capitalism. Our received and historical models are in the process of failing since the new potentials of digital capitalism and its contemporary configuration are a product of these older models and the responses they produced.

You can purchase the WBG edition of The Critique of Digital Capitalism from their website, or (in English) on Amazon.com