A Paratext: The Going Somewhere Game 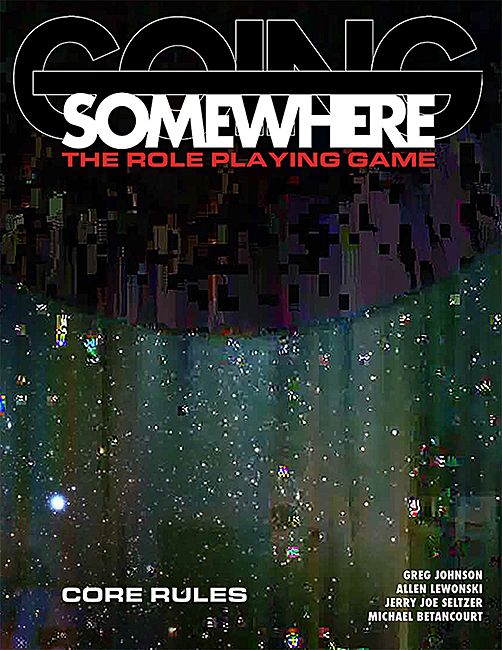 Going Somewhere: The Role Playing Game is a table top role playing game adapted from movie maker Michael Betancourt's avant-garde serial. Containing all the rules needed to play, this rule book is designed to provide hours of fun. Designed to simplify the complexity of RPGs to speed game play, these rules can be used for either SCI-FI or Fantasy campaigns.

Download it for Free or Buy a book from Amazon.com

The term “paratext” has been used to describe a wide range of materials and practices around feature films, television programs, and even video games that includes not only the title sequence (peritext), but the posters, trailers, theme songs, marketing and publicity, as well as product tie-ins, giveaways, and toys used to promote and popularize media productions (epitext). This application to motion pictures is necessarily an adaptation, yet it is one that has been embraced, particularly the concept of “epitext,” as identifying the marketing and promotion of motion pictures. Andy Bird, chairman of Disney International, discussed the need for epitexts, explaining their importance in attracting audiences outside the United States:

Whether it’s releasing posters, releasing footage from onset, whatever it happens to be, the story happens way before you actually see the event. So the movie now becomes like the main event of a much longer story. It has sort of this prequel and then it has this much more longer tale.

Kimmorley, S. “Disney's top global exec explains why the company has had to change the way it sees the world” Business Insider, July 13, 2017, https://www.businessinsider.com.au/why-disney-had-to-change-andy-bird-2017-7 retrieved July 13, 2017.

The cinematic paratext is typically understood in marketing as an expansive presence, outside and beyond the main text. This prominence for epitexts (such as this game) in the promotion of media gives the theorization and analysis of paratext an urgency derived from its commercial use; however, the peritext (such as the title sequence) does not have the same prominence in this expansion of marketing since it is part of the exposition “in” the main text—only when they are separated from that text (i.e. made into epitexts) does the paratext's role in marketing and promotional materials become clear. Unlike literature where paratexts occupy particular, well defined and easily separated sections—forward, epigraph, etc. that Genette considers in his book—the cinematic parallels are troubled by an inability to clearly and unambiguously mark differences within the text. Paratexts reveal an ambivalent meaning in their role as mediators of the transition between primary work and its extensions, as Jonathan Gray’s view of them does in his study of them in Show Sold Separately.